Social Commentary: A Violent God in Our Time 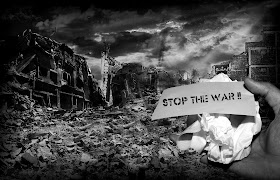 "I believe that God is absolutely good, but what the world can see is a violent God? The answer lies in your own interpretation of events and personal beliefs. Listen to your inner voice and get enlightened."

It was just recently when the world news about the rebellion in Libya took place. It was a violent protest and massive assault that resulted in vandalism, injuries, and worst of is, the loss of lives. This is almost the same thing that happened a few months ago when Libyan leader Gaddafi was captured and got killed by his own people. However, that was a more violent event in the country's history.


Violence happens all over the world and history would tell how rampant and cruel these events and end in a bad fate; destroyed human dignity, censored freedom of expression, distorted peace, and controlled the populace.

People would always fight for freedom. I mean, who doesn't want to express thoughts and sentiments freely? It is human nature to defend oneself if attacked... protect oneself if assaulted... fight for life if in danger. You always have a choice that's based on instincts. You are not expected to be quiet in times of rage. You are supposed to speak with your mind and protect your dignity.

Why is it that the world is always being shocked by Muslims? Why is it that the Muslims always spread terrorism? Why is the Muslims always wanted to kill and enjoy being a headline of world news? These may sound stereotypical, but isn't it that a certain behavior of an individual or a group is considered as a culture. There might be a radical Muslim community spreading globally, but they are totally unwanted and don't represent the religious philosophy of Islam.

Upon deeper reflection, some thoughts arise about terrorism that is linked with a certain religion.  Is a Muslim country, a culture of violence? Is it biblical teaching to kill people for the sake of religion? Extremists may be narcissistic and need the constant attention of the world, but it is to be stopped. There is nothing good about violent attacks...not good to hear about terror acts... not good news about honor killing even in the name of religion.

I have respect for every religion, but I condemn what I believe is not upright. There is always an alternative to violence. Never forget the power of 'peace process and bloodless revolution'. There is always a better way to act that will not harm people, destroy a country and affect the world at large. I believe that God is absolutely good, but what the world can see is a violent God? The answer lies in your own interpretation of events and personal beliefs. Listen to your inner voice and get enlightened.