Nazareno 2017: Devotion to the Feast of the Black Nazarene


"Upon my reflection, it's no wonder why Filipino devotees would flock on the feast of the Black Nazarene. The image of the passion of Christ is a symbol of our suffering and unending challenges. The pains brought by the desire to touch the rope is a symbol of our sacrifice and hope that 'everything will be alright' after the chaos or suffering."


The feast of the Black Nazarene is known to millions of Filipino devotees and faithful who are witnesses to the miracles of the Holy image of Christ. The image which came from Mexico and was transported to the Philippines on the 17th century gave meaning to our lives as a symbol Christ's passion and suffering on the cross.
Though the flocks of devotees started in 1950s, it remains at the present as one of the most revered Christian event in the Philippines. Since then, Filipino devotees strengthened their faith through the healing powers and blessings brought by the Black Nazarene into their lives. 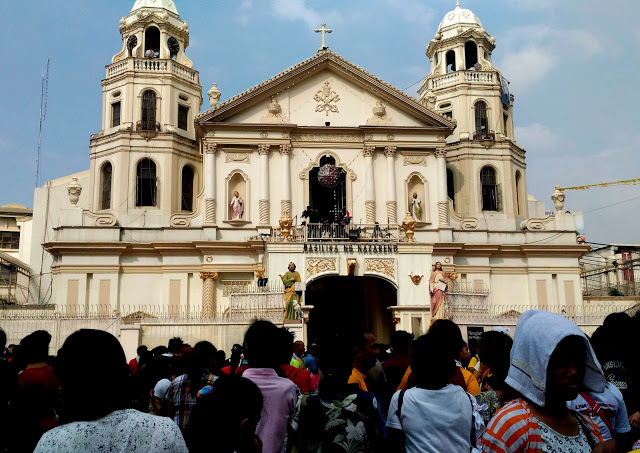 This year , the traslacion took 22 hours, almost a day of sacrifice to venerate and be able to hold the rope that is attached to the carriage of the Holy image. This tradition has been consistent every year, though many devotees defy any terror threat and a little discomfort as an act of sacrifice.
What could be the significance of this event to the millions of devotees? How could this belief strengthen their faith? What miracles does it truly give after their sacrifice? These are some of the questions that needs spiritual reflection and answer from a true devotee.

Back in 2013, I've witnessed the massive gathering of the faithful. The Feast of The Black Nazarene 2013. That was my first time to attend the live religious event of the Black Nazarene. I didn't witness the traslacion, but I solemnly pray my intentions inside the Minor Basilica, known as the Quiapo church. That was a memorable experience and since then, I had a devotion to celebrate it on its feast day wherever I may be.

Last year, Celebrating The Feast of The Black Nazarene 2016 was fulfilled. That was my second time to attend the live event as I missed the two consecutive years. It was a peaceful gathering in the vicinity of  the Quaipo church where devotees pray for intentions and blessings. Beyond the experience is the religious awakening and being one with the millions of Filipinos who are hopeful of achieving a meaningful and fulfilled life.

This year 2017, I haven't attended the live event, however I continue to follow and keep an update of the celebration. Upon my reflection, it's not wonder why Filipino devotees would flock on the feast of the Black Nazarene. The image of the passion of Christ is a symbol of our suffering and unending challenges.
The pains brought by the desire to touch the rope is a symbol of our sacrifice and hope that 'everything will be alright' after the chaos or suffering. Thus, we believe in miracles. Something that God can give in a mysterious ways and when we're defeated.
When people suffer and becoming sorrowful, comes an open hand and a grateful heart to receive God's intervention when we rely to his power. What God can do to us is limitless, and we Filipinos believe that no matter how hard life seem to be, still we can make it if we surrender everything to God's loving mercy.
The feast of the Black Nazarene inspires people to be committed and devoted wherever life will take us and whatever we do in life. For God loves us, and we give back love to the Lord, our God in return.