Where is The Divine Light in a Troubled Nation? 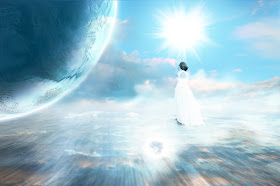 It was just recently that President Duterte declared  martial law in the entire Island of Mindanao, southern Philippines due to clashes of the government troops versus the local terrorist group "Maute" which is identified as an ISIS-linked group. That was late evening of May 23rd, this year when the news brought anxiety and fear among many Filipinos especially those who have remembered the negative effects of the 1972 martial law imposed by late President Marcos. Widespread violence and violation of human rights triggered the memory from the distant past; a horrible fate experienced by our countrymen on this kind of rule where there is absence of due process in a civil disobedience act.

Every year as we commemorate the People power revolution in 1986, it flashes back the kind of life Filipinos have lived under the martial rule; freedom of expression was suppressed and thousands were victims of cruelty and summary executions under the hands of the military people.

That was a history! and now the history repeats itself. This time the cause of the declaration is different. Martial law was imposed due to massive civil disobedience back then, but now the declaration is due to rising power and terrorism of the local terrorist group called "Maute" which is gaining popularity in the country and getting recognized by the international terrorist group -- ISIS who is known to be behind deadly attacks in major cities in the world. To date, thousands have been killed including the lives of innocent people; children heavily injured and killed due to conflicts and wars. People got sick and experienced post traumatic-stress symptoms that they will perhaps carry on for a lifetime. Their life was totally a hell on earth that some would have wished to die than to suffer.

In times of chaos and war, our government's primary goal is to bring back stability, peace and order by protecting its citizens from from harm and its negative effects. It is a tough challenge and putting it on the hands of our national defenders would make a difference in resolving the conflict. However, isn't it  that martial law was declared to protect our people? or is it a disguise for a hidden ulterior motive? We may never know the truth.

It's been centuries long of battle against terrorism in Southern Philippines, but it hasn't been totally resolved until the present time. Martial law may be extended even up to a year or might be declared in the entire archipelago, however it will not be the ultimate solution to end this national problem.

Where is God at these times? When people are praying for peace, evil forces are gaining more strength and spreading the darkness. Is God an absolute good? or Is There A Violent God in Our Times ? No one is spared, but anyone could be the next victim of this darkness even those who may bring the light. In moments like these, we need a Divine inspiration -- a Divine light to shield us from evil forces in this world. But why do God allow his people to suffer? The Philippines is a troubled nation despite of economic development and the invasion of darkness makes us become blind.

We have been fighting for different kinds of war; the drug war already killed thousands of suspected drug users including the dealers. It is right for the government to protect the good versus the evil and to eradicate them all has never been easy, instead we co-exist with these evil forces all throughout and in our lifetime. While terrorism can't be defeated easily, we desperately call for forces of Divine light to shower in us and to protect our love ones and the entire nation. We can't pass on to the next generation of Filipinos the kind of suffering we are currently living. We cant imagine our offspring to blame us of the problem that they inherit. Looking forward to 2025 or 2030 and beyond, what will be the fate of our nation? How will we live as a Filipino? Will there be a peaceful Philippines in years to come or are we about to start living in our darkest era?  Let there be light on our people; the defender of our democracy -- our leaders and the chosen ones. Let there be Good Governance Towards A Better Philippines and surely we will see the light after a long tunnel of darkness we're going through. I believe that where there is darkness, there is light! There's a healing in every pain and injury and there's a happy ending in eternity as long as we keep on fighting for goodness sake while unleashing the Divinity from within.